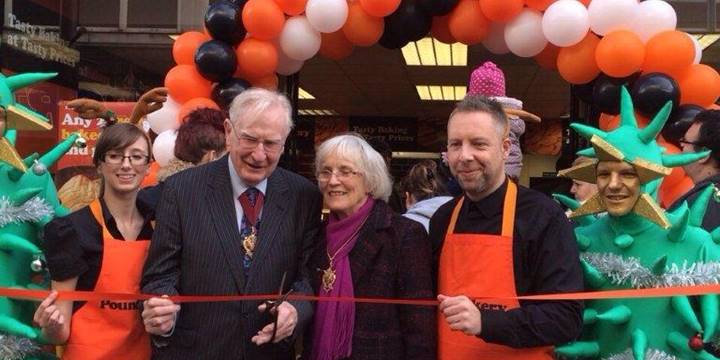 Over 2,000 people flocked to Queen Street, Wolverhampton today for the launch of our latest Poundbakery store, as Wolverhampton Mayor Councillor Mike Heap and Mayoress Frances Heap cut the official ribbon to announce the opening.

The launch of Poundbakery in Wolverhampton marks the third of a major roll out in the Midlands for the brand, with the recent openings in West Bromwich and Bilston celebrating thousands of customers each in the first day of trading. The success of the Midlands expansion will see additional stores opening in the West Midlands in early 2015.

Over 13 people have been employed from the local area in the new shop, with many more positions expected to open up following the success of the launch. Additional roles will also be available at the new stores which are due to open in the region.

Our shop Manager, Ben Schrieber says: "Our first day has been a roaring success. The people of Wolverhampton raved about the quality and the price and these prices are here to stay. People have been queuing out of the door since we opened and the mincepies and Christmas baguettes proved so popular that the sold out!!"

Back to news
Tasty Baking at Tasty Prices